While following the Linux Upskill challenge, I came across some unexpected behaviour: issuing sudo <command> didn’t prompt me for a password. No problem I thought; I simply need to set a password for my account. While I’m thinking of it, let’s update the password for root too, after all our ec2 instance isn’t using a firewall yet.

So there must be some config that means I’m not prompted for a password. Let’s look at the etc/sudoers file:

There’s nothing in there that is obviously preventing the password prompt. This question on Stack Overflow suggests that the problem may be a file in /etc/sudoers.d. Let’s look for all instance of NOPASSWD

Let’s look at the file (note the lazy history expansion):

This line means I’ll never be prompted for a password. Let’s fix that by commenting it out.

Oh! The file isn’t writeable. I could use visudo to edit it, but that is defaulting to use nano. Ugh, no thanks.

Instead, let’s check, and fix the file permissions

It’s owned by root, but root cannot write to it. Let’s temporarily make the file writeable:

Now we can edit it, and return the permissions 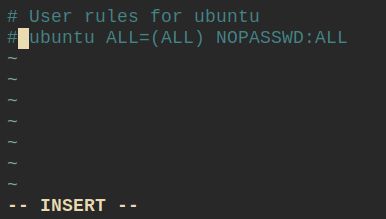 and test that we are being prompted for the password correctly: